Even a Constitutional Crisis Will Not Matter

We have pounded the table with the fact that news, whether financial or Geopolitical, does not drive the stock market. However, you might argue that news about a constitutional crisis, such as a serious attempt at impeaching a president, would surely destroy any market.  And since the mid-term elections gave the Democrats a majority in Congress, the odds of something nefarious befalling the White House are much higher now than before.  Let us look at history for guidance.

Mr. Trump has never been one to waste his time reading history books (or any kind of book, for that matter), so it is fair to assume that he really does not understand what happened to "Tricky Dick" Nixon, or why it happened.  It is very likely that someone has tried to tell him about it, but it is just as likely that he couldn't concentrate long enough to take it all in, especially since it is something he does not want to hear.  That is why he shot the messenger (fired Jeff Session) and hired Mathew Whitaker who, he thinks, will put a stop to the special counsel investigation.

Whitaker, for his part, despite making all manner of negative comments in the past about the Mueller investigation, is unlikely to interfere, at least not overtly and certainly not right away.  Whitaker is known for playing "both sides"; saying whatever he figured trump wanted to hear, but something else to the people running the Justice Department.

Whitaker knows, for example, that Nixon fired special prosecutor Archibald Cox on a weekend--which came to be known as the ‘Saturday Night Massacre’—because Cox had subpoenaed Nixon’s tape-recordings. And he also knows that immediately following the firing, the attorney General at the time, Elliot Richardson, and Deputy Attorney General William Ruckelshaus both resigned in protest, and that Nixon himself had to resigned ten months later.  It is doubtful that Whitaker is going to go down that road, especially with a Democratic Congress.

Just like Nixon's tapes represented a line in the sand because they would prove his guilt, so too would a subpoena of Trump's taxes be a line that the Donald could not cross.  At that point, Trump would have nothing to lose by firing Mueller since his tax files likely prove Russian involvement in his finances and political campaign, thus proving that the president of the United States of America is compromised by a foreign power.  Firing Muller would be a desperate act to stop the truth from coming out, but it would also be a failed act.  Like Nixon, it would be the end of the Trump presidency.

A constitutional crisis seems almost unavoidable at this point, so we need to think about what might happen to the stock market as a result.

During the Watergate scandal, when Cox was fired and then-Attorney General Elliot Richardson resigned in protest — the S&P 500 fell 14% from October 1st through November, but it needs to be pointed out that Wall Street was already mired in one of the worst bear markets in history. From January 1973 through August 1974, the Watergate burglars were convicted, Nixon resigned, Middle East turmoil created a global oil shock, and inflation had a dramatic increase resulting in stocks losing 42% of their value.

This time around, however, the economy is not in danger of slipping into a recession, the FED is normalizing rates at a measured pace and rates continue to be historically low, unemployment is likewise historically low, so is inflation, and the stock market is in the second-longest bull run in history. This makes today’s situation more like the impeachment of Clinton in the late 1990’s when the stock market and the economy were booming. At that time, the S&P 500 fell 20% in the lead-up to the special prosecutor’s report on Clinton (something similar may be happening now), but recovered quickly when it became apparent that a recession was not going to be triggered.

Today, we maintain that the market will recover from this correction for the same reason; the economy is too far-away from recession to cause a full-out bear collapse. Even the news of a constitutional crisis will not matter.

the 8-week MA looks to be forming a double up-spike.  This supports the SPX going higher. 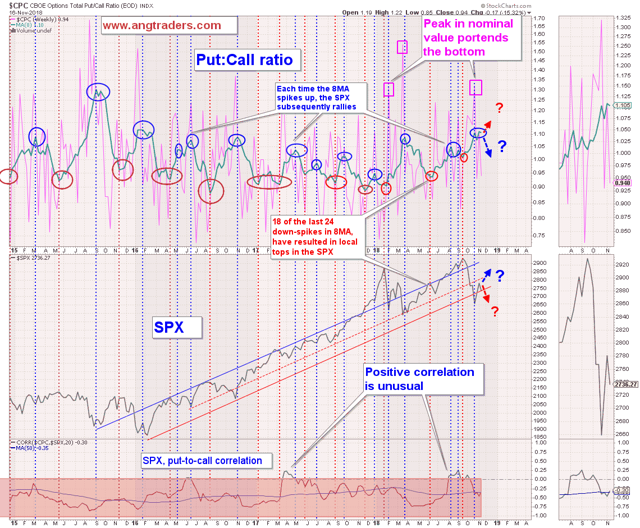 The VIX continued to back off the recent high. Even if it goes temporarily higher, the trend pattern (green dash-arrows) is one of lower VIX readings over the medium term. The 38% Fibonacci retrace of the February to October rally at 2800 is the next resistance which is what makes us think there could be some more upside before turning around. 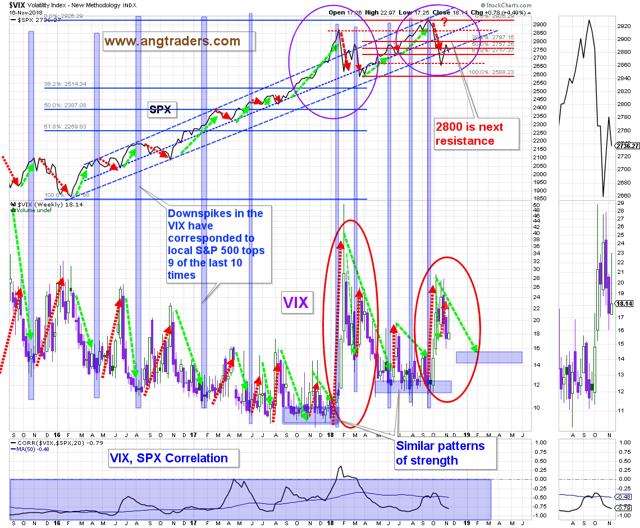 The long-term (monthly) situation continues to improve from what it was a few weeks ago; the important 8-month and 12-month MAs are no longer converging.

The behavior of the market is very similar to 1998 (pink rectangular areas below). Take note that going from the low on the S&P 500 in 1998 (957) to the high two-years later (1517) represents a 59% increase. The fractal nature of the trading patterns from 2000 that we are following, allow for a significant rise over the next year or two. 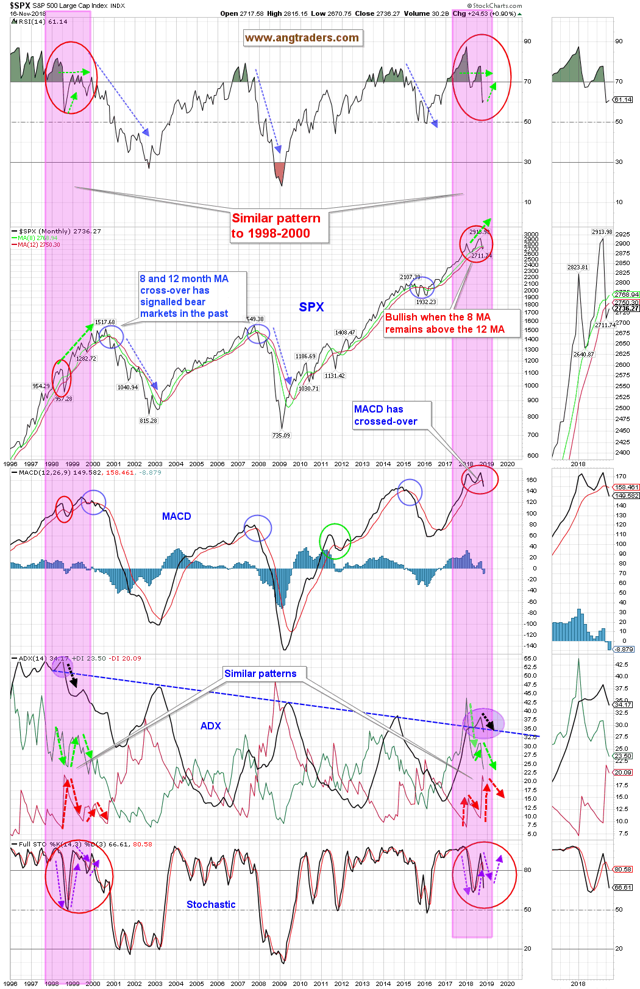 The C4 correction patterns of the SPX and its dividend yield from 2000 continue to replicate today.  We expect the SPX to increase and the yield decrease before the SPX drops once again to test the lows.

Even though the industrial and manufacturing increases for October are lower than the July and August ones, they are still higher than average for the year.  Bear markets do not start while the business cycle is expanding.

The spike in gold prices this week were a result of the currency market.  In particular, the Rally in the Euro and the pullback in the dollar.

The Euro has reached the 50% Fibonacci retrace of the September to November correction.  If this does not cause some resistance to the Euro, then there is the 62% retrace and the down-sloping trend-line at which the Euro could turn back down. 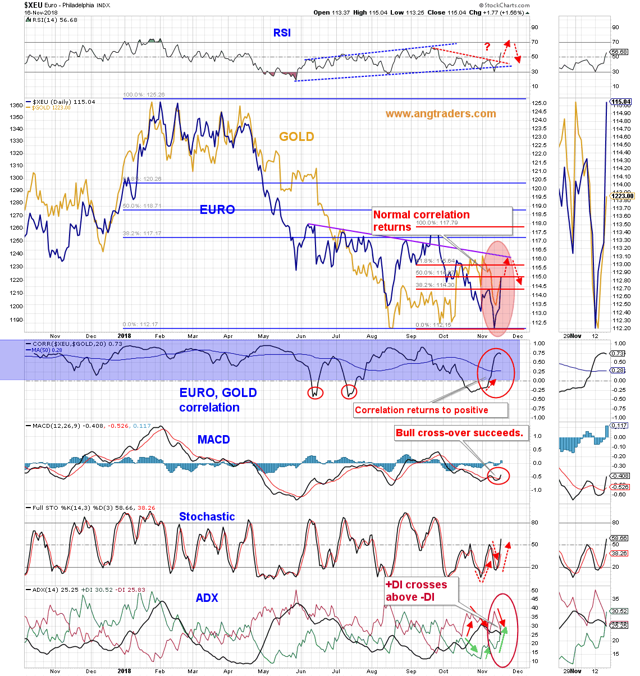 
The long-term (weekly) technical situation continues to mirror the pattern from 2013 (pink highlighted areas in chart below). 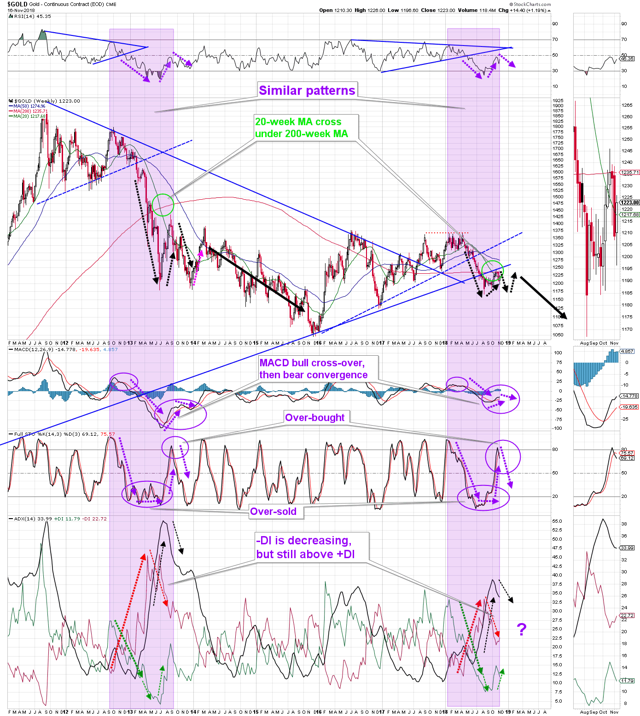 The commitments of gold futures traders continue at historical extremes, as they have since July of this year.  The usual correlations between traders' net positioning and the price of gold no longer hold.  We regard this indicator as useless, for the time being (chart below). 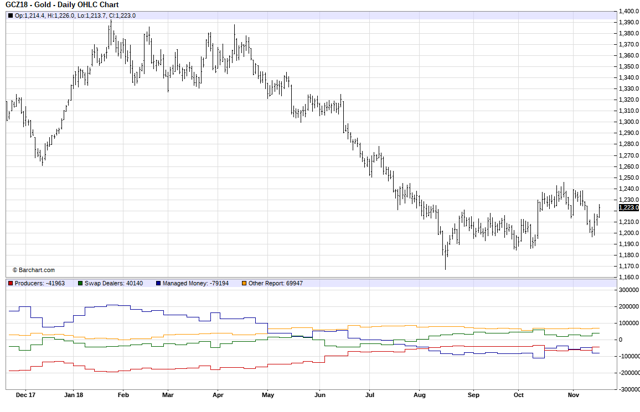 We wish our subscribers a profitable week ahead.