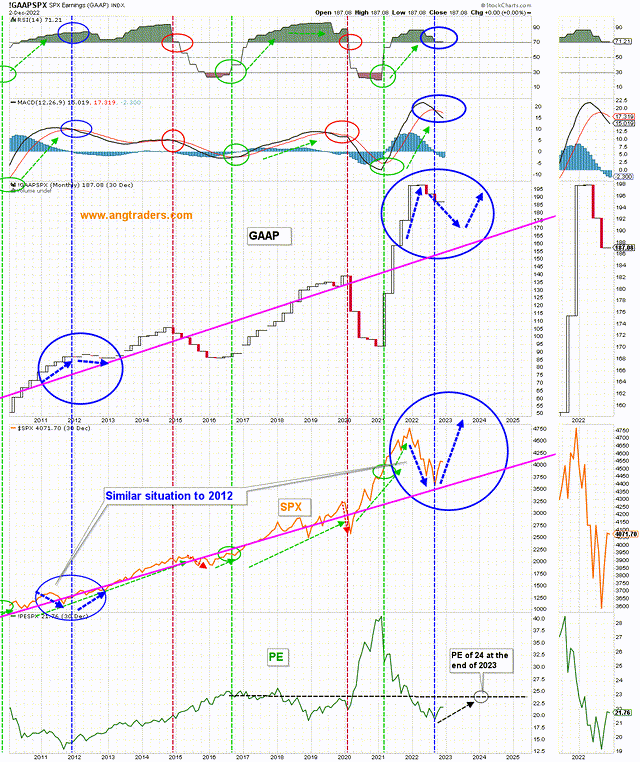 The 20-day average of the daily net-transfers has managed to remain positive (+$0.33B/day) even though the December tax-take was large. The infrastructure bill, the 2023 discretionary-spending bill, the SS inflation adjustment increase of ~8%, and the increasing interest-income payments will all help to keep the net-transfers positive this year. 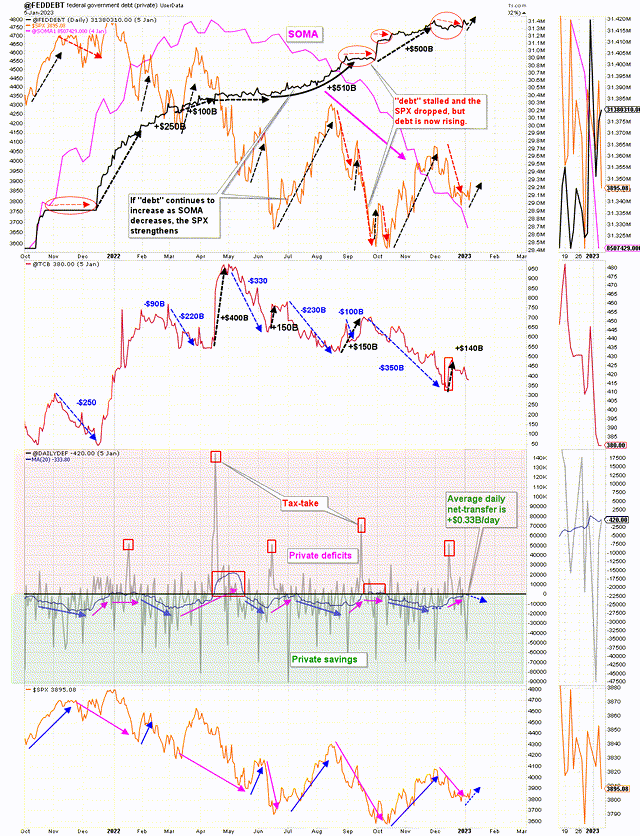 The "debt" (stock of Treasuries) stalled at the end of November, but has started to rise again recently. The SPX tends to rise along with "debt" (white areas below). Since we are already at the debt-ceiling, it is important that the (insane) debt-limit is raised or eliminated before the Treasury account runs out its balance (~$350B) and parts of the Government have to shut down. 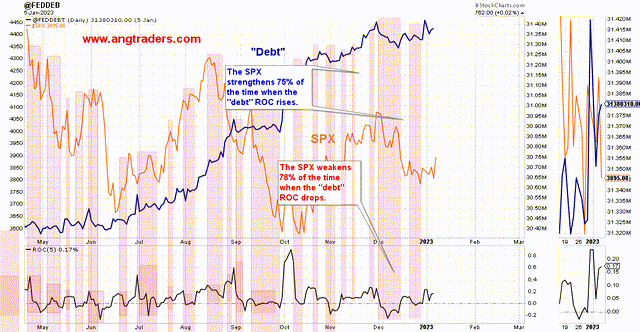 Aggregate bank credit has started to drop, mostly because of reduced car loans and a slight drop in commercial and industrial loans. 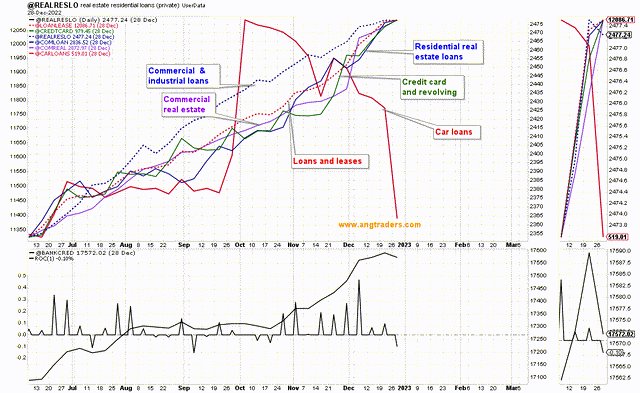 ...but the biggest factor in lower bank credit is the reduced holdings of Treasury-securities by banks which started with the FFR increase. Up until now, aggregate bank credit has been growing thanks to the increased private loan-creation which has made up for the reduced Treasury debt held by banks. 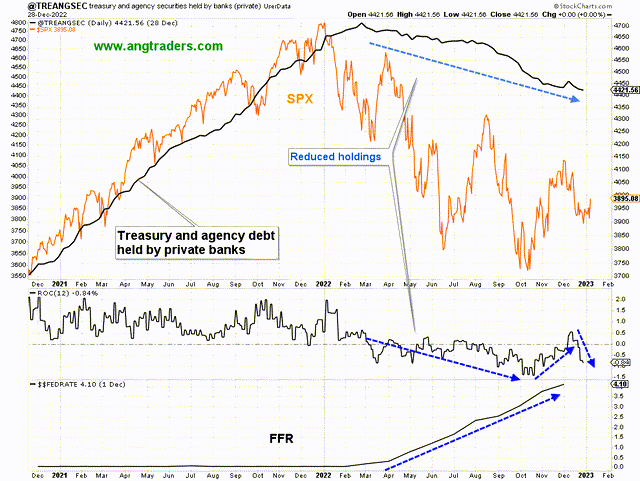 Liquidity pulled back in the last 2-weeks of December, but it has generally been trending higher since October.

The SPX is expected to follow the slope of a $2T/year net-transfer (green line below).

Peaks in HY, and troughs in LQD, correlate with lows in the SPX. The HY has been making lower-highs which is a bullish pattern for the SPX. 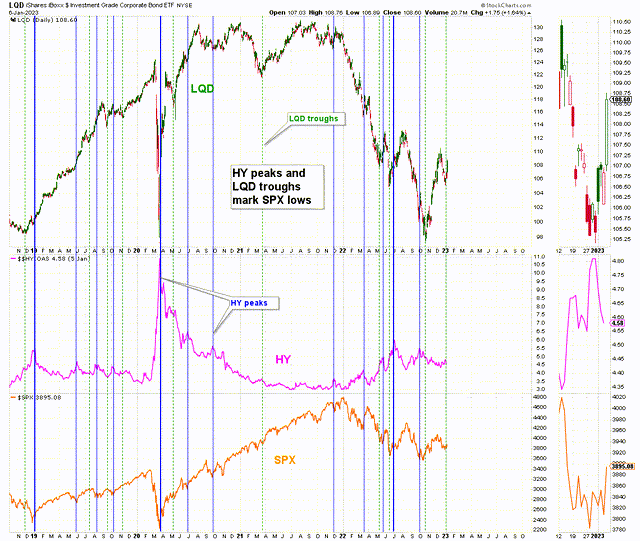 Both the reserves and deposits models are currently in a headwind period and show another starting next Thursday.

The foreign reverse repo pattern is implying a local low for the SPX.

There is usually a drop in credit (both private and public) at the start of a calendar year (pink boxes). Because 2022 has been one long drop, the start of 2023 might be less meaningful in this regard, but considering the on-going concerns that are carrying over from 2022, the market could "sputter" for a month or too. 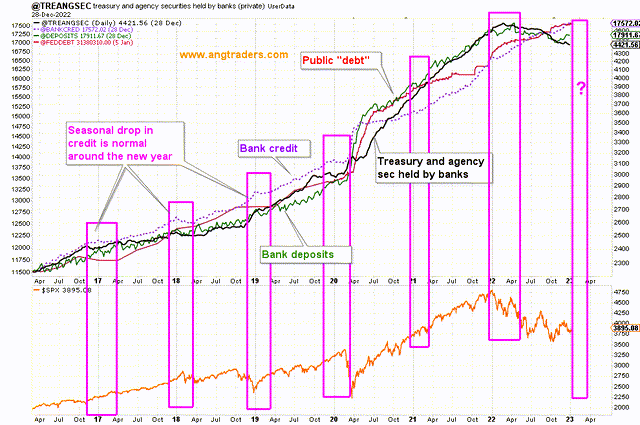 "Sputter" is not the same as "recession", however. Recessions happen 6-18 months after the second 10y-2y yield inversion and after the unemployment has increased. We are still in the first inversion and unemployment continues at historic lows. Before a recession becomes a realistic worry, we need to see the inversion get reversed and then invert again, followed by an increase in unemployment. It is highly unlikely that will happen in 2023. 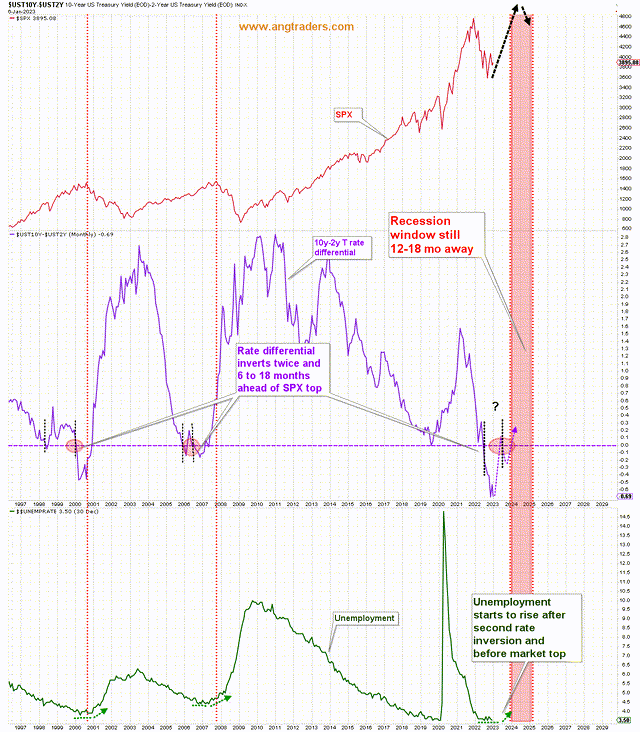 From a fund-flow perspective, there are several bullish aspects to the start of the year and throughout 2023 :

The increased interest-income that is being generated as a result of the higher FFR.

...but there are several bearish pressures also:

The usual seasonal weakness to start the year.

The debt-ceiling being used as a political weapon that leads to a government shut-down.

On-balance, and after a possible shaky start, 2023 is set to create a liquidity-fueled bull rally in the stock mart.