The Primary Trend is Still Bullish

The phenomenon known as the ‘market’, emerges from what is both a complex and chaotic system: Complex because of the innumerable variables involved (along with their interactions), and chaotic because, even if we knew how these variables interacted (which we don’t), we have no hope of knowing their initial conditions. Taking one of these variables and extrapolating it into the future in an attempt to predict the entire market seems like a ridiculous past-time, but that is what fundamental analysis does.

Our working hypothesis is that fear—fear of losing, and fear of missing-out—is what drivers markets, and that the economic fundamentals act as the ‘scaffolding’ that guides it and cements the established trend. The established trend continues to be bullish, even after a 10% correction; bullish sentiment remains below average, bearish sentiment is average, and nearly all the economic indicators demonstrate that the economy continues to expand. The mainstream financial news concentrates on the fact that the rate of expansion, in some parts of the economy, is lower than it was recently, while neglecting the very important fact that it continues to grow.

The past two weeks have hosted an emotional spectacle in the stock market; stocks rocketing up on news from the Fed that rates were “just below” neutral, then crashing straight down again on news of a Chinese CFO getting arrested and one of the rate-curves temporarily inverting. None of those news items have changed the primary trend in the stock market. In fact, a hostage taking in The Game of Thrones would affect the stock market’s primary trend just as much.

The primary trend has been up for the last ten-years and nothing has happened to change it; there has been no euphoric-buying, no talk about ‘it’s different this time’, and no excess build-up in the economy. The business cycle continues to expand, and sentiment is building a ‘wall-of-worry’ that the market is going to climb to new heights. Technically, the primary trend is in place until the long-term trend-line is breached. For now, the long-term trend-line is a further 9% to the down side (chart below).

The bull-bear differential sits at +7.4%, which implies only a 16% probability of a market top (chart below).

The 8-week MA was unchanged this week after forming a wide double up-spike similar to September 2015 and January 2016, which happen to coincide with the double bottom at that time in the SPX (black pointers on the chart below). We may have seen the lows for this correction, but that does not preclude another downswing before the bottoming processes completes (chart below).

The chart below shows the put-to-call ratio at the daily-scale with the 8-day MA highlighted. The vertical blue dashed-lines mark the up-spikes in the 8-day MA which also correspond to local bottoms in the S&P 500. Since April, these up-spikes have formed a pattern of lower-highs like 2017 (blue solid trend-lines  on chart below).

…it is reasonable to expect the ratio to continue lower until it bounces off the blue down-sloping trend-line before heading higher, and the SPX continues to rise, then fall in an inverse relationship

That is exactly what happened. Now that the 8-day MA has started moving up, the question is how much further will it rise and how much will the SPX react to it (chart below)? If the correlation continues to go more negative, then further downside in the SPX is likely. However, if the correlation stabilizes, the SPX could move sideways as the put-to-call ratio (8-day MA) rises (chart below). 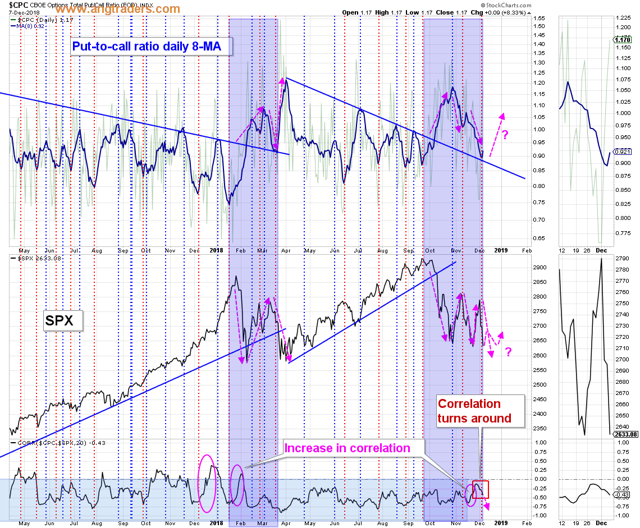 What we wrote three weeks ago still holds:

…there is still another pullback to come before the bottoming process completes and the bull market continues.

We did get a pullback in both the Rydex bear:bull ratio and in the SPX, but it is not clear that the SPX has completed its pullback. The bottoming process may have further to go. Even if we don’t go seriously lower, we may not go immediately higher, either.

The VIX has been following the same downward pattern that it did at the start of the year (green dashed-arrows on the VIX chart below).

… we see the likelihood of another, perhaps smallish, pull-back in the SPX before we get back to the bull market.

We got a pullback, but it was not smallish. The downward pattern in the VIX continues to point to a return of the bull market rally. 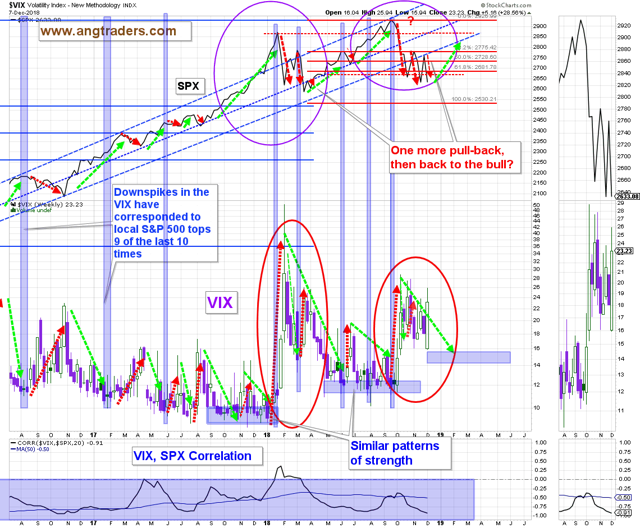 The ratio of the SPX to the 10-year Treasury volatility (SPX:10y T volatility) demonstrates a pattern where down-spikes correspond to local minima in the S&P 500 (vertical blue dotted-lines) and to up-spikes in the VIX. 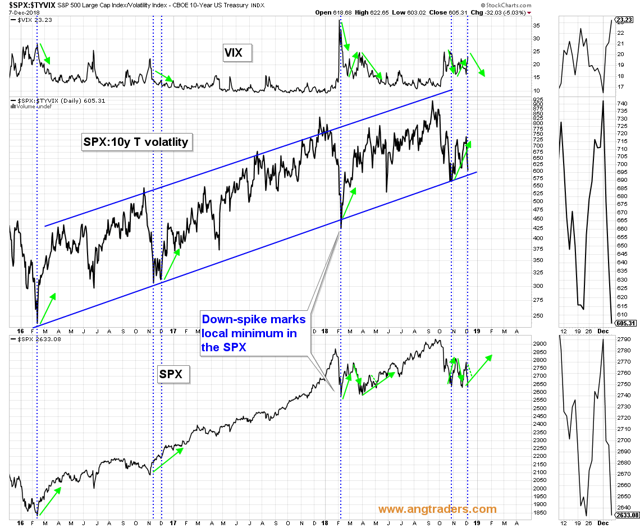 The emerging markets (MSCI) started diverging from the US market earlier this year. The chart below shows that after every down-spike in the correlation there is a rally in the SPX as the correlation returns to positive (vertical red dashed-lines).

Every time that the 50-day MA of the ratio of the Russel 2000 to the SPX crosses under the 200-day MA, the SPX rallies. Since that pattern remains in effect, the SPX is expected to rally.

The long-term technical picture continues its similarities with 1998-99 (chart below). The important 8 and 12-month MAs continue to maintain their separation, but have flattened during the past week. A cross-over would imply technical weakness that would lead to significantly lower prices.

Our intention is to close half of the SPXL position in this zone (2760) and continue to hold the remaining half in anticipation that the SPX will reach up to the 2800-2810 resistance area (62% Fib). We think it likely that the SPX will pull-back from that level before breaking above the 2813 level and resuming the bull market

The market shot higher on Monday and we closed half of the SPXL position but were unable to close the last half because it didn’t stay at 2800 long enough before pulling back. We think it probable that there will be further slippage down to the 2600 area before a rally starts (two charts below). 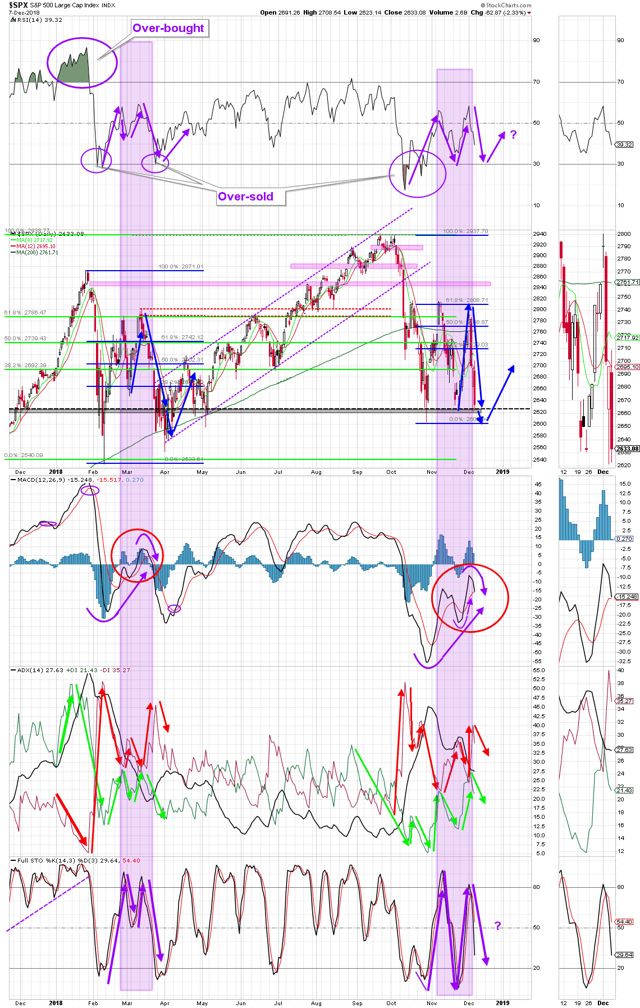 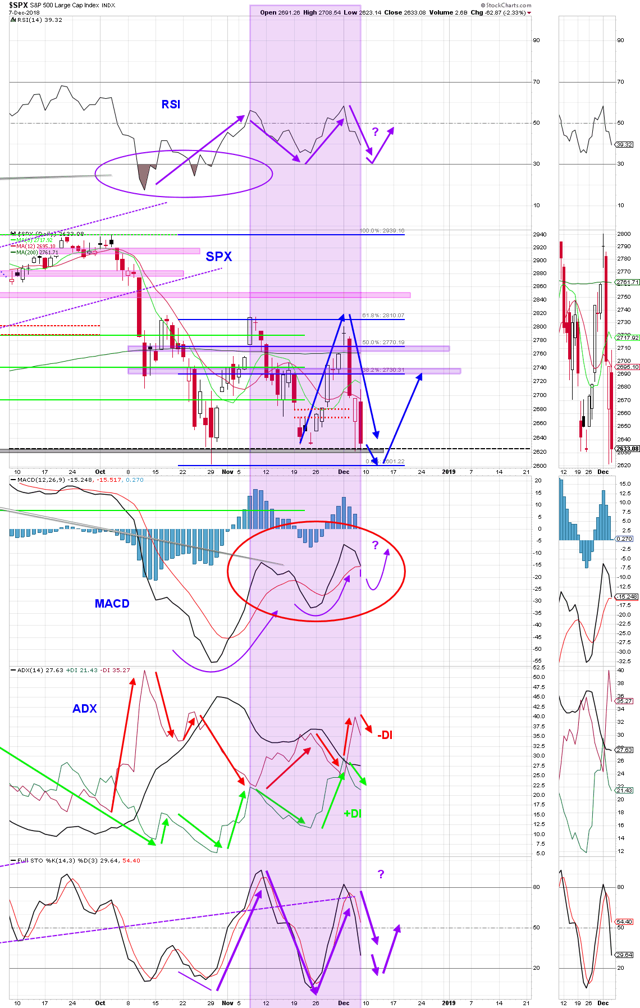 In Thursday’s update, we emphasized that we regard what happened this week in the market as “a correction searching for a reason” and the latest ‘reason’ is a rate inversion; the 3y-2y inverted temporarily but finished at zero, and the rest of the curve stayed positive.

Even if the most important rate differential of all, the 10y-2y, is to invert, it still takes between 6 and 18-months before a bear market takes hold and, on average, the market rises ~20% between a rate inversion and a bear market. In addition, both the rate differential and the unemployment rate must start rising ahead of the bear. And let us not forget the almighty Federal Reserve which, despite tightening rates, still has leeway for three or four additional rate hikes before making rates “too high” (~3%-4%). The market has severely mispriced the effect of a potential inversion. The primary bull-trend remains in place.

Thursday and Friday of the past week, provided a host of economic and employment reports which show that, although some numbers were slightly weaker, overall, the business cycle is still expanding. Subscribers can have a look at them all here.

Fundamentally, the ‘scaffolding’ of the market is sound, and in terms of sentiment, there is enough fear present to drive this market roaring upward once the bottoming process completes.

Gold has been the beneficiary of the ‘risk-off’ trade; lower rates, lower dollar, lower equities.

The dollar was nudged down by the drop in rates and by the technical resistance at the 97.70 area. Considering the size of the drop in rates, the dollar actually held up quite well and seems to have moderated gold’s rally; with such a large drop in rates, gold could have rallied further than it did (chart below).

From a long-term perspective, gold and the dollar continue to replicate the similar pattern from 1998-2001 (chart below). 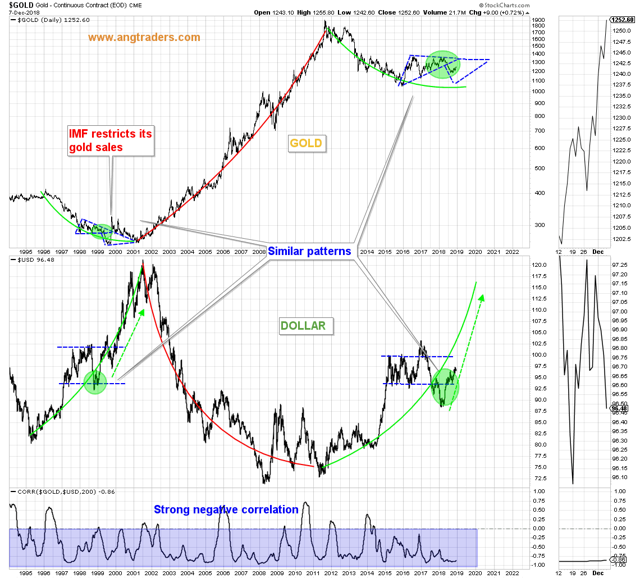 Technically, the pattern from 2013 is still in play. Gold has bumped up against the long-term trend-line which will apply some resistance. The next resistance level is the 50-week MA at $1275. If the pattern continues to replicate, we should be close to a minor top, followed by a retracement in price (three charts below). 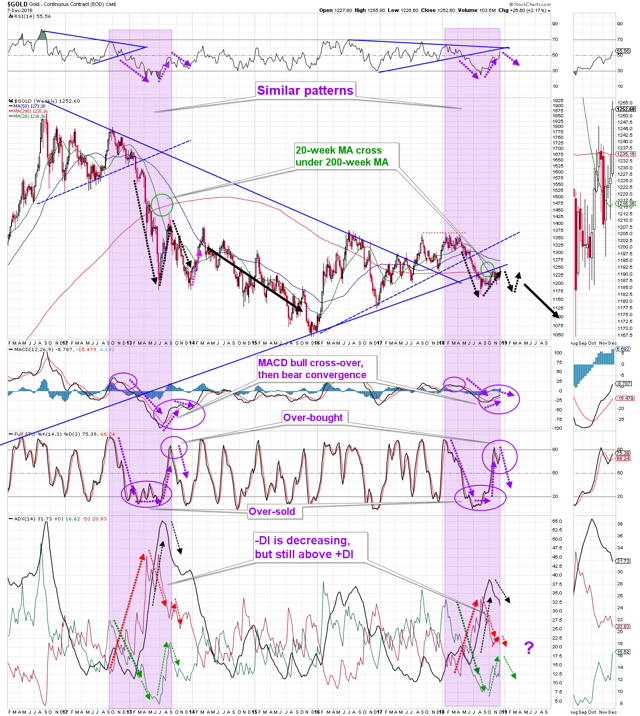 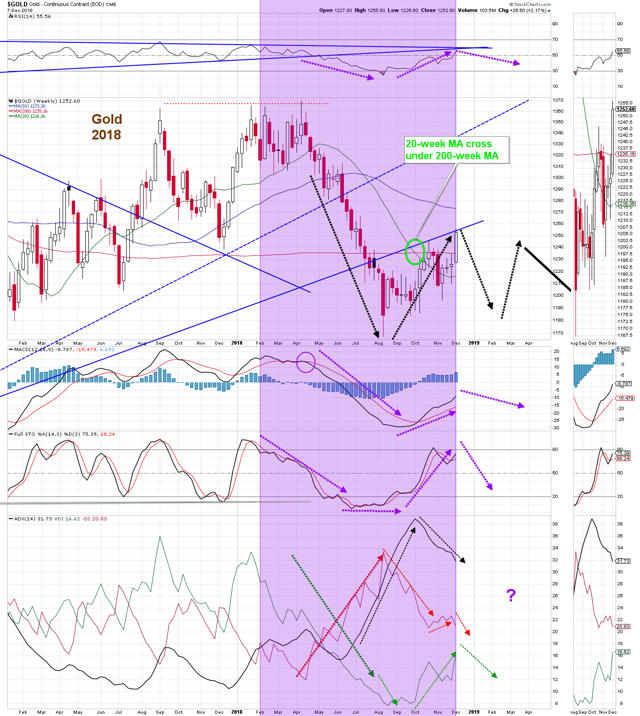