Weather and markets are complex systems, both of which humans endeavor to predict. It is fair to say that meteorologists are better able to predict weather now than they could back in 1940, but the same cannot be said about market predictions. We are no better, and perhaps worse, today at predicting markets than in the past. Why?

The more knowledge we have about the historical weather, the better and more accurate models we can build. Increased understanding of how the various components interact to create weather, allows us to better predict the future. This is so obvious that it is almost trivial. However, when it comes to predicting the future of markets, a paradox arises; the more we know, the less we can predict.

As Yuval Harari points out in Homo Deus, “…as we accumulate more data and increase our computing power, events become wilder and more unexpected.” The reason for this paradox is the fact that the components of the market are conscious individuals who are themselves changed by the new knowledge. Here is Harari once again:

Imagine, for example, that one day experts decipher the basic laws of the economy. Once this happens, banks, governments, investors and costumers will begin to use this new knowledge to act in novel ways, and gain an edge over their competitors…..once people change the way they behave, the economic theories become obsolete. We may know how the economy functioned in the past—but we no longer understand how it functions in the present, not to mention the future.

A recent example of this involves the prediction of inflation that was made by most analysts during the early years of quantitative easing (QE), post-2008. Loose monetary policies around the world had created trillions of dollars in an attempt to save the financial industry, so it made obvious sense to expect that inflation would appear alongside monetary expansion. Ten years later, however, there is still no inflation to speak of. The obvious was obviously wrong. Some things really are ‘different this time.’

In the case of weather, however, the causal components are not conscious individuals and are, therefore, not changed by the increased knowledge. That is the crucial difference. The more that is collectively known about the market--by the market--the more complex the market itself becomes. The more complex a system is, the less predictable it is.

For this reason, we have always asked ourselves ‘what is constant about the conscious individuals who make up the market?’ The answer is emotion. Specifically, fear and greed (fear of missing out). That is why we track sentiment in a variety of different ways.

Another old market adage—no two markets are alike, but markets do rhyme—reflects the constancy of these emotions. The ‘rhyming’ in the markets can be visualized in the repetitive patterns of the myriad of indicators and averages available to us. No pattern repeats with 100% fidelity, but the closer the pattern is related to emotion, the higher the probability it will repeat.

The obvious (no pun) question to be asking at this point is: What about the machine-learning algorithms? We know they have no consciousness and, therefore, no emotions. And we also know that these emotionless machines are responsible for most of the trading that makes up the market. Since a majority of its causal components are not emotional, should not the market become more “weather-like”?

As it turns out, the market continues to be as emotional as ever. We think the reason for this lies in the fact that the algorithms themselves are learning how to trade by studying historical trading patterns. These patterns, in turn, were created by emotional human traders, so it is reasonable to expect the machines to trade like their teachers—like emotional human traders—only many times faster.

It turns out, emotions continue to be the only constant we can find in an increasingly complex market—even one composed mostly of AI entities. Fear and greed reign supreme--even among the machines. 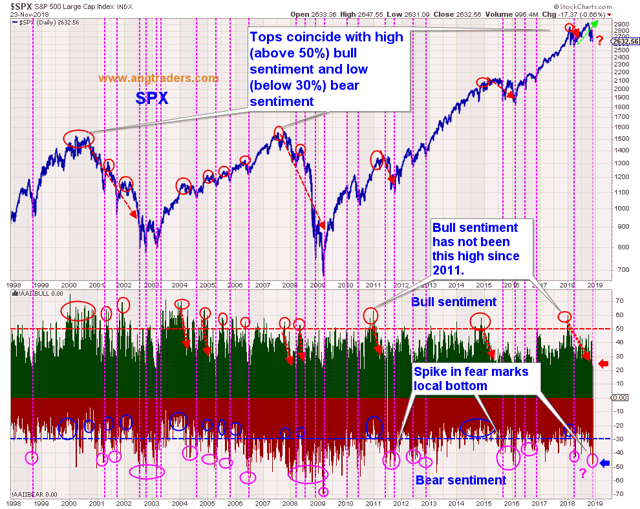 
The National Association of Active Investment Managers (NAAIM) exposure index 50-week MA leads market down-turns and lags market up-turns. The average has dipped lower, but this does not change the bottoming process (chart below). 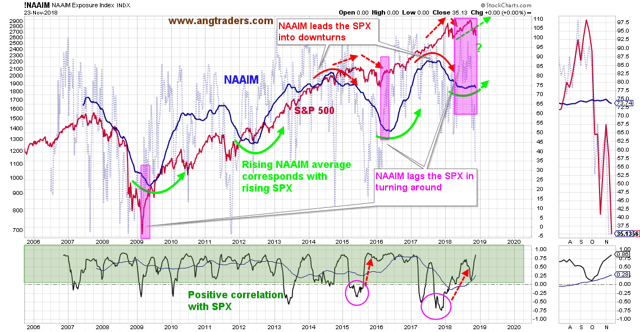 The 8-week MA continued to move higher, thereby negating the double up-spike. We are still in the bottoming process (chart below). 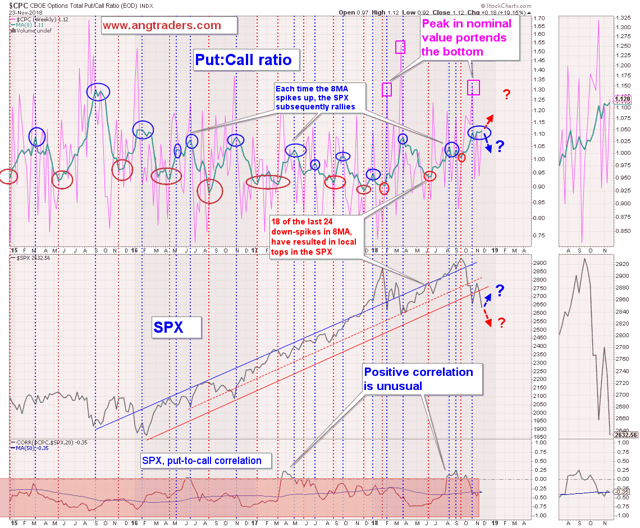 The VIX increased this week, but it managed to close below the down-sloping trend-line (green dashed-line) which is what is expected in a correction. The 2800 resistance level was not reached, as we had expected. The SPX dropped below the previous low (like it did in March) and is now facing the 2590 support zone. If this support is breached, then the long-term trend-line at 2400 comes in to play (chart below). 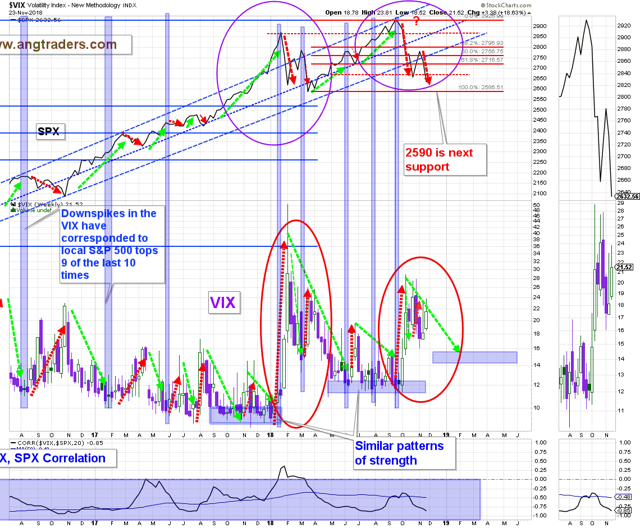 From a sentiment perspective, there is too much fear for this to be the start of a bear market. But that does not preclude further corrective behavior.

As we stated in the Nov. 20 update, it is now looking like we are further along in the C4 correction pattern than previously thought (pink highlights in the two charts below). On both charts below, we have the following similarities:

The Nasdaq Bullish Percent index is the percentage of Nasdaq stocks that have a buy signal based on Point and Figure analysis. The chart below shows how down-spikes in the Nasdaq Bullish Percent index lines up with S&P 500 lows (vertical red dashed-lines on chart below). Although the index (and the SPX) could go lower from here, the conditions for a bottom are in place:

RSI is in over-sold territory.

MACD has spiked down.

Correlation is at a maximum.

This indicator is saying that we are close to a bottom. 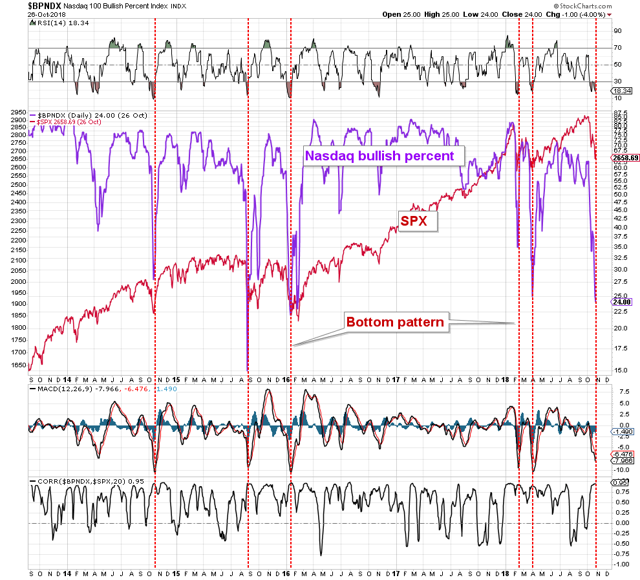 “We expect the SPX to rally up to the 2800 area where we will consider opening new short positions.”

That most certainly did not happen, and we did not get a chance to take-on short positions. The SPX just kept dropping to just above the 2600-2620 support zone. The market is likely to test 2600, but chances are good that we get a bounce from there (blue lines on chart below). 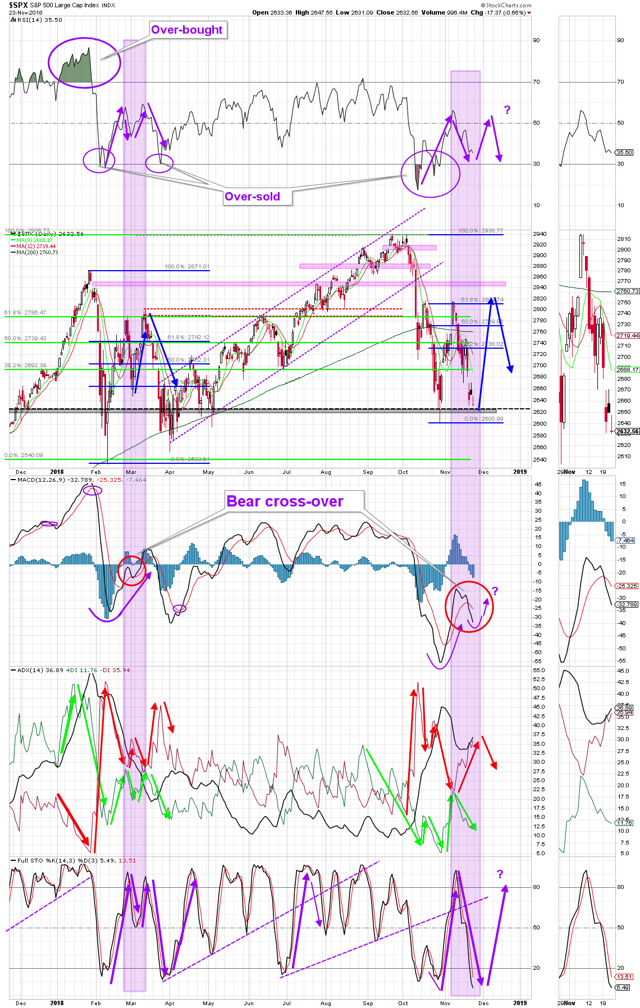 Even if some of the economic indicators are starting to show marginally-slower growth, we remind you that the economy is accelerating (first derivative) and it is only the rate-of-change (second derivative) of acceleration that is slightly negative.

This Friday, the Markit PMI numbers came out:

The business cycle is still in an expansionary phase.

The interest rate differential (10y-2y) changed only slightly last week, going from +0.27 to +0.24. At the present rate-of-change, an inversion is still 6-months away (chart below).

The market may drop to test the 2600 level, but a bounce is likely in the short-term.

As we have pointed out in the past, the price patterns today in the gold/dollar relationship are similar to 1999-2000. In both cases, the dollar was in a trading range before it rallied hard, and gold was trading out of a triangle formation while the dollar was range-bound (chart below). 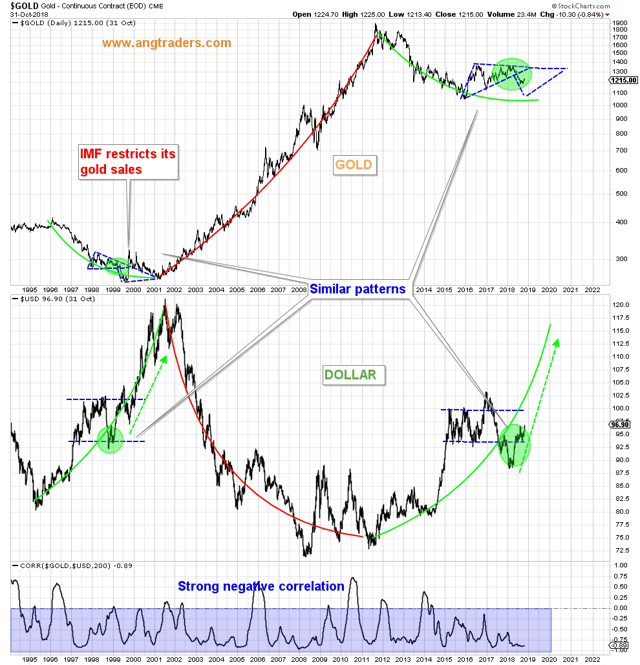 Rates, at all parts of the curve, have dropped and their correlation with gold has moved up to positive territory. Since the beginning of this year, the correlation of gold and rates has been whipsawing back and forth so much that they are no longer of much analytical value. Rates may have plateaued for the next little while which may help to support gold prices at these levels, but since rates are unlikely to move much lower, gold is unlikely to break above $1250.

The long-term (weekly) technical situation continues to mirror the pattern from 2013 (pink highlighted areas in chart below).


We wish our subscribers a profitable week ahead.